We all had our plans for 2020.   Scottish education had its best-laid schemes in 2020 too.  On 27th April the annual examinations diet, was to begin with the Higher German Reading and Directed Writing paper.  Instead on 19th March, the Cabinet Secretary announced that the exams were to be cancelled and alternative arrangements to be put in place in face of the significant disruption arising from the global pandemic.

Scotland wasn’t alone in its response. UNESCO carried out an analysis that showed 58 out of 84 surveyed countries had postponed or rescheduled exams, 23 introduced alternative methods such as online or home-based testing, 22 maintained exams while in 11 countries, they were cancelled altogether.  Higher Education institutions moved fairly rapidly to no detriment policies of assessment and many operated on formative assessment processes in 2020 with no final exams in examination halls.

Of course, cancelling the exams for schools and colleges for one year raises the question, why have exams at all?

In 1947 in a time, after a previous global crisis the Scottish Advisory Council on secondary education offered a radical approach for assessment. In the pantheon of reports in Scottish education it was fairly scathing about examinations,

“The influence of examinations is three-fold. It affects the treatment of the examinable subjects themselves, tending always to exalt the written above the spoken, to magnify memory and master of fact at the expense of understanding and liveliness of mind. It depresses the status of the non-examinable, so that the aesthetic and creative side of education, with all its possibilities for human satisfaction and cultural enrichment, remains largely undeveloped and poorly esteemed. And lastly, the examination which began as a means, becomes for many the end itself. In the atmosphere created by this preoccupation with examination success, it is difficult to think nobly of education, to see in it the endless quest of man’s preparation for either society or solitude. The cult of the examination has proved all too congenial to the hard practicality of the Scot, and in excessive concern about livelihood, the art of living has tended to be forgotten.”

“It is said that many teachers like working towards examinations. There could be no more urgent reason for getting rid of them”

A point perhaps more graphically echoed in an UNESCO report on accountability in education in 2017. 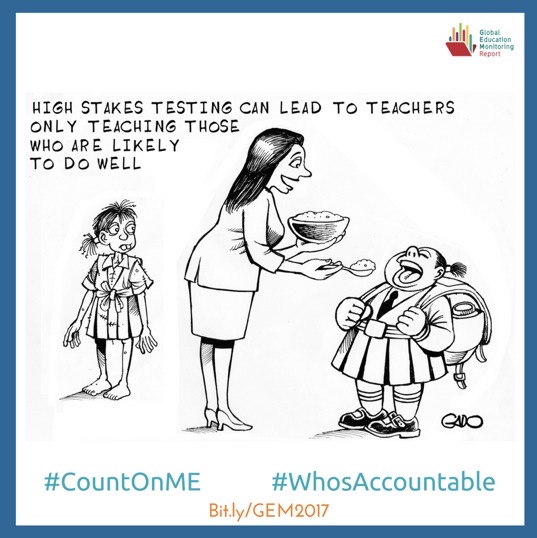 Across Scotland’s qualifications framework we have already got rid of exams for 20% of the entries across schools and colleges. That’s without questioning the trust placed in teachers and lecturers to accurately assess pass or fail National 2, National 3 and National 4 for one fifth of qualifications.   Some might suggest  exams are only for most young people!

A starting point to consider changes to assessment and certification is to consider inclusive approaches for all learners as they and their teachers certificate their learning over the three years of their senior phase.

In June 2020 UNESCO launched its Global Education Monitoring Report on Inclusion and Education. (Just to share an idea where it was coming from – it compared debates on inclusive education as similar to debating the abolition of slavery or ending apartheid. The Scottish Parliament has debated inclusion three times in the past three years!).  The report in promoting inclusive education for all was critical of “one size fits most” approach.

The GEM Report 2020 included a chapter on Curricula textbooks and assessment subtitled “How can students learn if the system reminds them of their exclusion?”

It looked at assessments from the viewpoint of inclusion and called for the focus to shift away from high-stakes assessments and instead to focus on students’ tasks: how they tackle them, which ones prove difficult and how some aspects can be adapted to enable success. In its view low-stakes formative assessments carried out over the education trajectory were far more fit for the purpose of inclusive education.

This would also mean that the crises of sudden interruptions in education such as pandemics would be less of an issue for ensuring qualifications were unaffected.  Ending external examinations would crisis-proof our education systems!

Changing assessment practices is only one part of the puzzle. While inclusive approaches have implications for curricula and resources such textbooks there are more fundamental issues about the purposes of education and moving away from the sausage factory of latter stages of schooling.

In Scotland and across the UK we have become over-centralised in education and neglected the roles that schools play in their local communities by too often focusing on debates about international comparisons, national standardised assessments and narrowly concerned with one dimensional attainment gaps.  If we are serious about empowering schools and teachers then less centralised approaches are necessary in terms of curriculum, assessment and accountability.

View all posts by SEAScotland